When commentators refer to rising inequality, they mostly mean increased inequality in rich countries like the US. But while national inequality may have increased in some countries, global inequality has decreased significantly over the past 25 years. Professor Kunal Sen explains more.

Whose disparity should we care most about? That of the American, who has become worse off in relative terms in their own country over time? Or the Chinese worker, who has both grown richer in absolute terms, and whose position has improved as compared to their American counterpart?

Substantial amounts of cheap, Chinese-manufactured goods were subsequently purchased by American consumers. While this hugely increased the employment opportunities of low-skilled Chinese workers, leading to a sharp decline in poverty in the country, the employment prospects for American workers who had been producing similar goods deteriorated.

The conundrum then is: if one has to do something about reducing national inequality – as President Trump has said he will do by increasing tariffs on Chinese imports – it may exacerbate global inequality. Often simple-minded clarion calls for reducing inequality may miss the nuances and complexities inherent to the debate.

Between 1988 and 2008 we have seen the rise of a global middle class, which essentially reflects the move out of poverty of many Chinese households – and those of other very low-income countries. At the same time, we have observed a remarkable rise in the incomes of the top 1% globally. The big losers from globalisation have been middle- and lower-income people in rich countries – represented by the big dip in Branko Milanovic’s Elephant Curve (Figure 1). 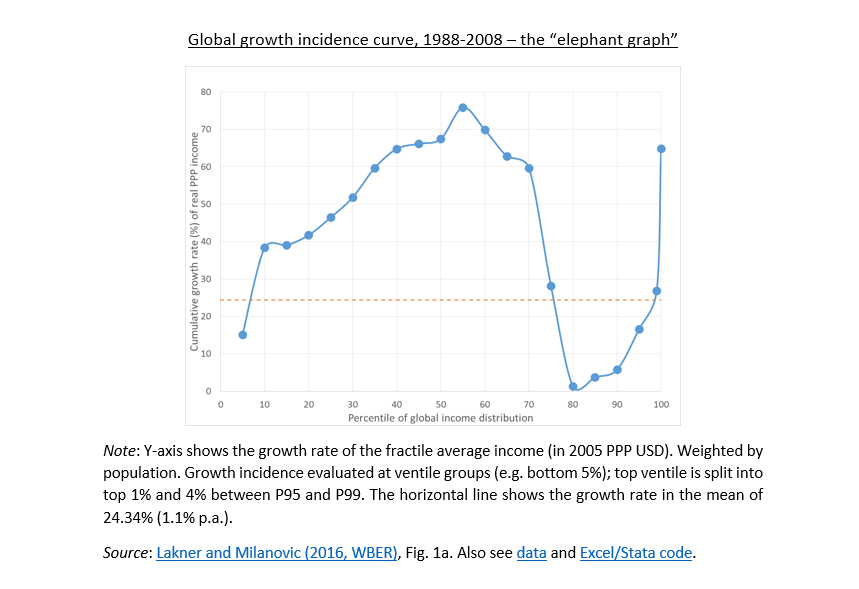 Their worsening economic condition explains, to a large extent, why inequality has become a core issue shaping the politics of rich countries today. Most economists believe that extreme inequality of opportunity – in terms of access to quality education, healthcare and other factors that contribute to an individual’s ability to live a good life – is the inequality that really matters, as it can lead to a persistence of intergenerational inequality.

However, economists disagree about the solutions and debate the benefits and costs of policies that attempt to reduce inequality.

One example of this quandary is the relationship between structural transformation and inequality.

The solution for Chinese policymakers is not to thwart the processes that led to remarkable increases in income and a reduction in the number of absolute poor in China, but to find ways to manage the inequality-generating effects through a range of redistributive measures such as progressive taxation and social assistance. We can call this the developer’s dilemma, and it is one currently faced by many low- and middle-income countries.

How inequality evolves in these countries will depend on the development path they choose. This will also have implications for whether global inequality is reduced, which should be the goal of long-run international development policy.

Kunal Sen is Professor of Development Economics in the Global Development Institute, the University of Manchester, and Co-Investigator on the ESRC Global Poverty & Inequality Dynamics (GPID) Research Network. He is also the Joint Research Director of the Effective States and Inclusive Development (ESID) Research Centre and a Research Fellow with IZA, Bonn.

This article originally appeared on the Global Development Institute Blog.

Themes on our blog